riginally from the Quad Cities, Aaron Allen began his artistic career in Saint Louis, MO. He began to develop passion for sequential storytelling by studying with the Joe Kubert School of Cartoon and Graphic Art. His early illustrations can be seen in John Sparger’s Stories from the Asphalt. His artistic experience has led him into areas of poster design, private commissions, and exhibitions. 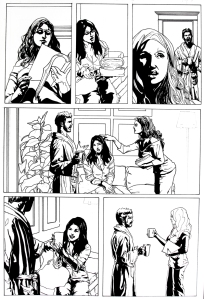 In 2010 Aaron teamed up with the online web comic company One Squared Studios, illustrating “Dirk Spear’s Adventure Squad”. Up and coming projects with the company include “Cradle” and Hex Proof.”

Look for some creator-owned projects soon!