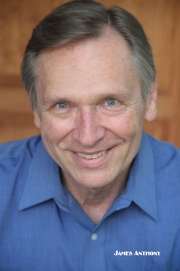 We are thrilled to announce that James Anthony has joined the cast of FOUR COLOR EULOGY as Father Infantino!!

During his 39-year career, James has performed in over 250 professional theatrical productions.  In New York he created the character of The Philosopher in the Off-Broadway production of THE CROCK OF GOLD and was seen on the daytime serial ONE LIFE TO LIVE.  Regionally, he has  literally made a living playing Sheriff Dodd in THE BEST LITTLE WHOREHOUSE IN TEXAS for which he received a Josepf Jefferson Awards nomination.