As the producer of a film that is all about Comic Books and those that love them, I have been spending a lot of time during our pre-production meetings, location scouts, and fundraising efforts with some hardcore comic geeks. The writer and lead actor in “Four Color Eulogy,” Jason Contini, has worked for years in a comic store. Writer and Co-Producer, Nicholas Hearne, is not only a big geek, but co-founder with Jason of the comic series “Legacies End.” Director/cinematographer, Wyatt Weed, has worked in the film industry for over 25 years, and he himself is not only a fanboy and geek, he is also quite the hero among fanboys when they find out that he was IN an episode of “Star Trek: The Next Generation,” as well as the fact that he was a Predator in the film “Predator 2.”

Being surrounded by all of this geekery, it would be hard to see how some of it wouldn’t rub off. But I got thinking the other day – I don’t think I can blame these three men for the comic book geek-ness that I now have. Well, not entirely.

When I was a kid and our family would take long road trips, there were no DVD players in the car, or iPads for my brothers and I to use to entertain ourselves… nope. Crammed in the back seat, trying to stay on our side of the car so as not to cause a fight (or, intentionally crossing the line just to cause a fight) we had to pass the time in less electronic ways. 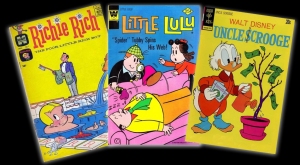 Dad would stop at the gas stations and truck stops and Mom would let us kids all pick out something to read. I (being a girl) would pick out the Archie, Little LuLu, Richie Rich, or Scrooge McDuck comic book.

We’d all climb back in the car, with hundreds of miles to go before we got to whichever campground near whichever national monument at which we were spending our summer vacation, and each of us kids would crack open our comic books and quietly read (much, I’m sure, to my mom’s pleasure!).

Once I finished my Richie Rich comic, and we still had hours to spend in the car, they boys and I would trade off books. So, I read the Superman, and the Batman, and the Spiderman as a kid.

Now, looking back, I fondly remember those comics, and I take pride in actually understanding what the fanboys in my life are talking about when they mention Mr. Mxyzptlk, and I know that to make him go away, you get him to say his name backwards… (ahhh… the things you remember from being a kid!).

This past Thanksgiving, the family went to Mom and Dad’s for the long weekend. One night, I was looking for something to read before going to sleep and opened the drawer next to the bed in the guest room… and holy cow! There were all of the comic books from childhood… well, all of the ones that were not Super Heroes… it was like all my old friends were there – Casper the Ghost; Betty, Veronica, Jughead and the Riverdale gang; Wendy the Good Witch; Huey, Duey, and Luey; Little Audrey… they were all there, and flipping through this stack of magazines, I had a nostalgic (and incredibly unexpected) feeling sweep over me.